Eden Quine-Taylor is a young, award winning filmmaker whose work has an emphasis on telling stories about humanity and exploring the behaviour and relationships of current society. 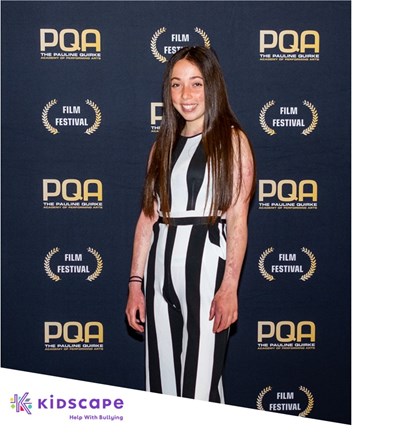 Some of Eden's accolades are, Best Film (12-15 Years) at the INTO FILM Awards (sponsored by Paramount Pictures), The PQATV & CMC Changemakers Jury Award, Pauline Quirke Academy’s Young Filmmaker of Year and the U21 Rising Star Award WINNER at the BAFTA recognised Carmarthen Bay Film Festival. Eden is a member of the Youth Advisory Council for INTO FLM CYMRU and a young spokeswoman for CMTC-OVM, a non-profit patient organisation for the rare disorder CMTC and other vascular malformations.

"Being an ambassador for Kidscape is such a huge privilege to me. I believe that no child deserves to suffer, whether that may be emotionally or physically. Life is created to be lived to its fullest. It is my hope that as an ambassador for Kidscape, I will be able to help young people see that despite the difficult times, life will always open its doors to new and exciting possibilities. I want to encourage young people to be kind to themselves and to discover what is really important to them."