As a young girl, I had always loved writing, and it became my solace during the bullying I suffered throughout my childhood. Writing enabled me to create my own reality: a world where I wasn’t laughed at or tormented, one where I actually had friends, and one which I was worthy of living in. Writing became my coping mechanism and I wrote many stories, but sadly only some poems survived the test of time. Most of my works were subsequently ripped up as I realised the world I had created could never exist, and I was stuck in my bullying reality. For a time, however, my words comforted me, and I dreamed that one day they would empower, and comfort, someone else; I never expected that someone to be my own son.

My middle son was about six years old when he came to me and told me that some kids at school were bullying him. The next few months and years were a heavy burden for us to carry as my son endured name-calling, cruelty, violence, and extreme loneliness. Over the years I picked him up and encouraged him, I stuck up for him, and I was his shoulder to cry on. Every night, before he went to bed, I would re-tell him the same story, of him having an inner superhero. His superhero was kind, brave, strong, and fearless. I would remind him that this superhero was his positive inner voice and I taught him that he should use this inner spirit to drive him on. Unfortunately, his inner superhero had been drowned out by all the negative voices, and I wasn’t sure my stories were helping him; until one evening a light bulb was lit.

One evening after I tucked my son up in bed, my husband said “well, you definitely have a talent for storytelling and one day one of your stories will change someone’s life”. That was when I decided to create Big Little Voice, encompassing all the stories that I had told my son over months and years. I set about writing him a book that I hoped would empower him and make him realise how amazing he was. I desperately wanted to change my son’s life, make it better, and give him hope. In a few short weeks, I had written Big Little Voice Colours the Grey. This book was a visual reminder of the stories I had always told him, something he could read and re-read whenever he felt he needed encouragement. I needed some help with the illustrations as I knew what they should be, but could not draw them myself; I finally felt I had accomplished my mission and I could rest, or so I thought.

My book was never supposed to be for anyone else but my son. However, when friends of mine heard the story, and after reading the book, they encouraged me to get it published, as they believed it could greatly help other children in the same position. I remember asking my son what he thought and he said “Mum, if your book can help someone else to never feel as bad as I have, get it published, and let’s help as many children as we can”. Since its release, at the end of 2020, Big Little Voice Colours the Grey has received many positive reviews, from anti-bullying charities, school headteachers and teachers, parents, and many young readers. I have also had the pleasure of presenting my book in schools and spreading the anti-bullying message far and wide. My son and I both hope that Big Little Voice Colours the Grey will go on to have a positive impact on anyone who reads it and that as many people as possible are able to read it.

I am so passionate about bringing to the forefront the antibullying message that I recently became a Schools and Community volunteer for Kidscape, a national anti-bullying charity. Their mission is simple: providing children, families, carers, and professionals with advice, training, and practical tools to prevent bullying and protect young lives. Kidscape is completely committed to empowering children and they provide ZAP programmes for kids between the ages of 9-16. These practical workshops are free to attend and are aimed at raising self-esteem, teaching assertiveness skills, and developing a positive sense of self. My son was fortunate to attend one of these workshops and it was not only beneficial to him, but to our whole family. The skills he learned that day are skills that we still use to this day. I hope as an author, and now in my role as a Kidscape volunteer, I can do my bit to help children realise that bullying is not something they need to go through alone and that there is always a light at the end of the tunnel.

Big Little Voice Colours the Grey is available to buy from all major retailers or directly from the publishing house here.

For signed copies, details of school visits and news about upcoming books in the Big Little Voice series visit www.mgvaciago.com 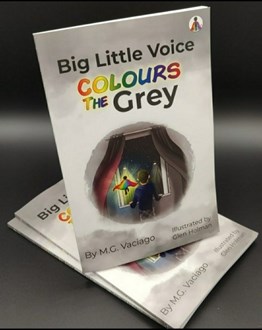