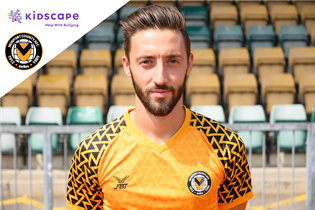 Josh Sheehan is a 25 year old Welsh Professional footballer, who has recently become a father to a beautiful little girl with his partner Elinor.

Josh started his career at the age of 10 when he joined Swansea City Academy. He then went on to sign a contract with the Swans in 2012, before having loan spells at Yeovil in 2015 and Newport County AFC in 2016, where he then returned to Swansea City.

Josh then moved on a permanent contract to EFL League 2 Club Newport County AFC in January 2018 as a very creative and attacking midfielder. During his time at Newport County AFC, Josh has played his part in the team reaching the 5th Round of The FA Cup (2018/2019) and also the Sky Bet League 2 Promotional play offs at Wembley Stadium (2018/2019).

Most recently Josh and the team have reached the semi-finals of the Leasing.com Trophy (2019/2020) and also won the Paddy Power Unsponsored Derby against Macclesfield Town (2019/2020).

Josh is delighted to be joining us as an Ambassador for Kidscape Wales.