As I joined my first year of high school I was so nervous, but excited by the fact I was going somewhere new and could make lots of new friends. In primary school I was confident,had friends and did lots of activities such as football and dance. This was the main reason for choosing this school and not the other local school where most of my friends from primary were going. My mum was also happy as this was a smaller school so she thought it would be a more nurturing environment.

Things went well until I was targeted by a group of girls in Year 7, they started to bully me verbally and physically. Deep down I couldn’t understand why, why did they do it to me? I kept trying to  make friends but they left me out.I felt alone and lost all of my self esteem, so I stopped going to dance and all of the other clubs I had joined,to stay away from them.

After weeks of being attacked and even being cyber bullied I decided to build up the courage to tell my parents what was happening  to me, they were not very happy about this at all. The next day they asked for a meeting with the school to discuss these issues. Like most schools would,they told my parents I was in their care and not to worry, they knew who the ring leader was and this would be stopped.

However, I wasn’t fine, deep down my parents knew that, they tried to support me, with little support from school until the evidence of what was going on began to build up.

I was so alone without any friends in Year 7 and this continued into my second year of high school.This was when boys and not just the girls, started to bully me physically as well.

A group of boys followed me home one night, they pushed me in the mud and were kicking and hitting me.This happened on a busy street and nobody stepped in to help me. My mum reported this to school and was told the boys would be dealt with but this didn’t stop them.The bullying culminated in one of them pushing me down a flight of stairs this led to me sitting in A&E for 4 hours to find out if my badly bruised foot was broken.This was the final evidence my mum needed to confront school. The bully’s had only badly bruised the bone in my foot, but I was broken inside.

Inside I felt trapped and was always on alert in case they tried to hurt me again. At that point I couldn’t take it anymore, people were so mean and they still wouldn’t accept me for whatever reason. I still didn’t understand why they did this and it drove me crazy. They then decided to start manipulating situations to make me believe it was my fault they were treating me like this. I started to not know what was true anymore and I would get the feeling that I needed to run away, but I couldn’t. This was when normal situations started making me anxious, if I heard the sound of people running, I would think they were coming for me.

I stopped being me anymore. I lost my fun crazy personality, I lost my spark.

At the end of my second year my parents made the decision to move me to a school in a new area where I knew no one. However,my mum worked at this school and it gave me reassurance that if anything happened like it had at my old school my mum would be there.

Moving to a new school was terrifying. Many people judge you on first appearances and I changed mine to appear tough so nobody would come near me and so they couldn’t hurt me. I hated that they didn’t know what had happened to me and why I acted this way. They didn’t see the real me or how I was feeling inside.

I felt numb. I can't remember much of my first months there, I blacked everything out. I felt like I was a walking zombie. I didn’t eat or sleep, I was scared I would get bullied again.

Being treated the way I had at my old school had a serious effect on my everyday life. I started to lack confidence, being unable to walk out of my home without feeling anxious, my body was on alert all of the time and this in turn meant I got every bug going as my immune system was so low.Knowing that I couldn't just run away made me worry that I was going to feel this numb forever and stuck in a world of fear.

I had no motivation anymore to do the things I loved like dancing and singing. I started to have hatred for myself. I became angry towards the people who tried to help me.

This broke my parents' hearts and I Knew that, but I didn't know how to get better within myself, so I just withered away.

A school teacher told my mum about Kidscape and my mum went home that night and booked us to go to one of the workshops in our local town.At first I didn’t want to go, what could THEY do?

After months of depression and feelings of loneliness I finally felt like I was in a place where I belonged. The workshop told us about how to talk and answer back to what the bullies said to us, and how to present ourselves to others as confident and not coming across as too timid or aggressive. 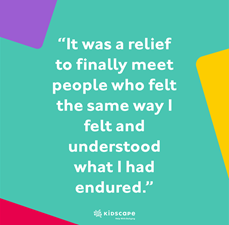 We also talked about how it's okay,not to be okay. We took part in group tasks,the other children were in my age group of 13-15 year olds. It was a relief to finally meet people who felt the same way I felt and understood what I had endured. We all told our own stories and supported each other. This led to us making a bond and agreeing to keep in touch with each other after the workshop.

Kidscape really changed me. I went home feeling comfortable and confident, however I knew these feelings probably weren't going to last long. I decided to work on my confidence step by step just like kidscape advised me to do.  I did this by starting to walk alone, saying “Hi”to new people and not getting upset even if they didn’t reply.I joined a musical theatre group,took up guitar and singing lessons, all of which had been my passion before the bullying started.

Kidscape helped me to make friends with people who know how it feels to be very low and bullied. I was inspired to push myself out of my comfort zone, and to grasp amazing opportunities without giving in to self doubt.

If I hadn’t gone  to the kidscape workshop I feel I could never have escaped the loneliness and sadness of my life. 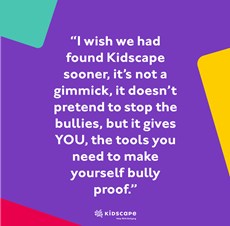 To anyone else who is getting bullied I want you to understand you are not alone, people can help you and you really can do anything you put your mind to. Be yourself and be proud to be you. I wish we had found Kidscape sooner, it’s not a gimmick,it doesn’t pretend to stop the bullies but it does give you the tools you need to make yourself bully proof.